A unique house. A unique roof. And one of the most spectacular refurbishment projects we have ever seen.

It's not always about the size of a roof. A Geodesic dome home is among the ultimate roofing and welding challenges. This refurbishment project ended up much closer to the architecht's intentions than the original roof.

A Geodesic dome house is made up of a number of "grand circles", intersecting to form smaller interlocking, structural, triangular elements on the face of the dome. This unique house type was developed in the 1940's  by American designer and engineer Richard Buckminster Fuller.

The history of a troubled roof

So how do you go about refurbishing the roof of a house like this?

This dome, situated in Caterham in Surrey, has a roof surface of approximately 450m2 and was built back in the 1980’s.

It was presumed that the bituminous shingles were the original roof finish, but as the roof was stripped, more of the buildings history revealed its self.

The original roof been attempted in GRP, but the original builder went bankrupt before the project was finished. The GRP in question was a disaster, and in places it still had not cured 40 years later.

The next roofing contractor used bituminous shingles over the GRP to allow the build to continue. The shingles softened all of the angles and hid the geodesic structure beneath. How we solved it

Bespoke solutions, an inventive approach, attention to detail and solid craftmanship is what it takes to succeed with this most challenging project, an ultimate test of a roofer's abilities. The end result is gorgeous, as both roofing professionals and laymen can attest to.

Protan laminated metal has been used to form sharp lines on every ridge and valley. This, combined with the flexibility and reflexive surface of Protan's single ply roof membrane has successfully defined each panel, giving the dome the appearance the original architect was striving to achieve.

Due to the size of each equilateral triangle forming the structure of each panel, it had to be formed from two right angle triangles. These were cut from 2 meter wide rolls of Protan SE 1.6 membrane.

To ensure each panel had the embossing running in the same direction, two rolls of membrane were cut simultaneously to produce a left and right. The offcut from each were used on adjacent panel. This worked well to get the maximum yield from a roll, which has both an economical and a sustainability benefit. By reversing the direction of the embossing on each panel, the light is refracted differently which further accentuates the geodesic structure.

The exceptional detailing work on this project highlights the amazing geodesic structure, and demands a high level of attention to detail in the welding of the single ply membrane.

This project was so bespoke it required over 50 sheets of laminated metal which was all cut and bent on site by hand. The entire perimeter of the roof is concealed box gutter, all formed from laminated metal which extends up and under the drip termination of the roof, in between which vents are installed to allow airflow from the eaves to the newly formed low profile ridge vent.

Protan Omega profiles have been used on top of the Dorma windows to direct rainwater down either side and into the main gutter below. 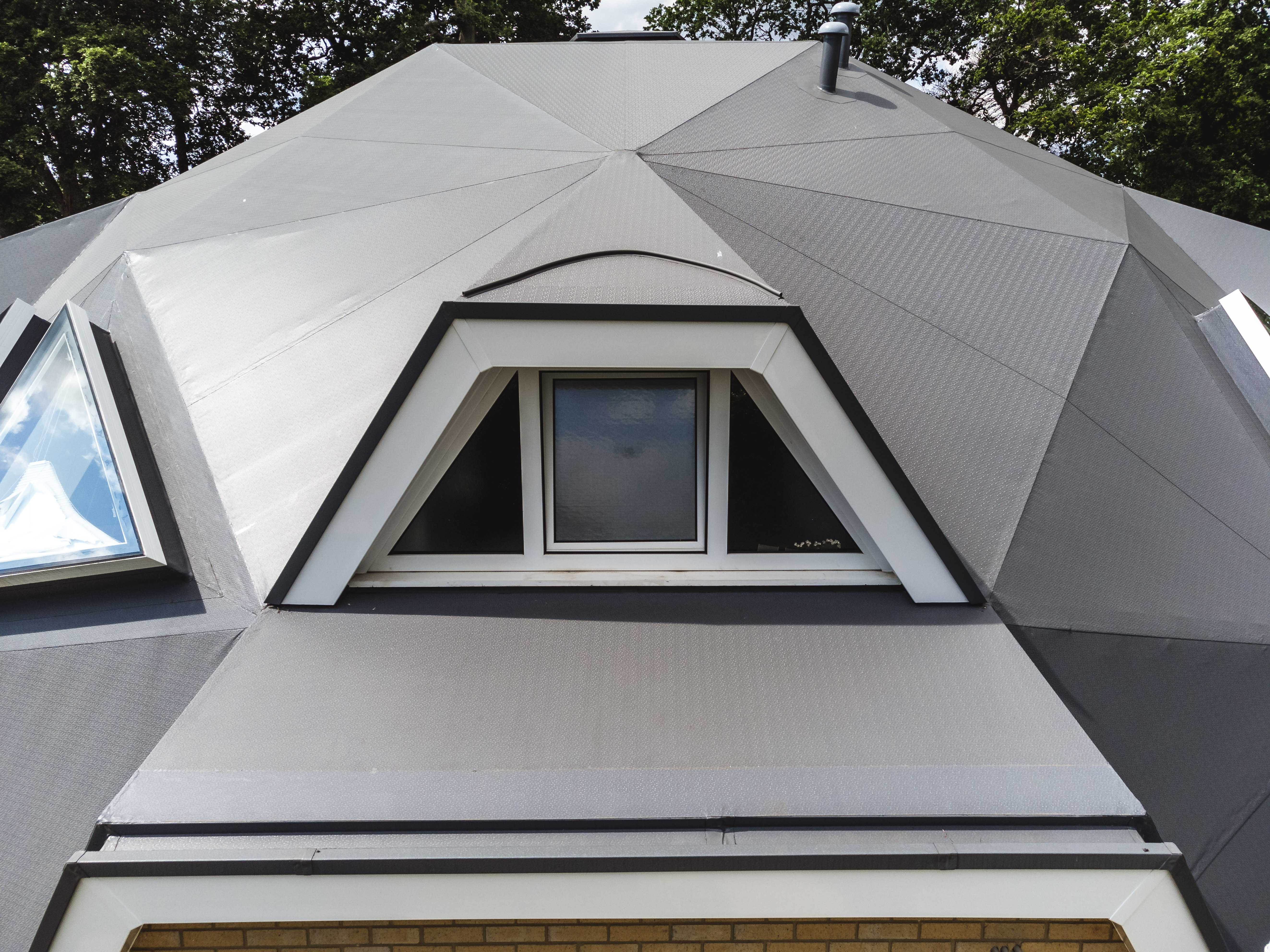 The exceptional detailing work on this project highlights the amazing geodesic structure, and demands a high level of attention to detail in the welding of the Protan SE single ply membrane.

Bespoke rooflights were commissioned and installed.

20 year warranty and a life expectancy in excess of 40 years.

Protan’s quality solutions for exposed roofs are long-lasting, robust in all types of climates, technically sound and sustainable. Protan’s roofing solutions can be used on all types of substrates, whether new-builds or refurbishment projects. The roof coverings are quickly installed, and all joints are welded with hot air.

Green roofs are becoming more and more popular, especially in densely populated urban areas, where it’s important to use available roof space. Green areas and roof terraces increase value both for property developers and those who live in or use the buildings.

Extreme weather is the new normal. This is why Protan has developed a blue roof solution that reduces the risk of flood damage.

Protan has solid and durable systems that protect verandah and balcony floors against moisture, mould, rot and corrosion.

Want to know more? Get in touch with our sales team